So where was I when I ended my first blog – regarding how I beat stress using Autogenic Therapy?

Accepting that I had a problem with stress and its unpleasant associated medical side effects was the easy part. Knowing what to do about it was far more difficult and I thrashed around for several weeks in a state of confusion without any real understanding of how best to combat my problem. Without diminishing how bad I felt I understood that I was really a member of the “worried well” brigade rather than someone with deep-set psychological or mental health issues.

All I succeeded in doing was making myself feel worse but eventually a friend of my wife told me that she had suffered in a similar way to me and had greatly benefited from a course of Autogenic Therapy and she recommended her therapist to me.

I was totally bemused as I had never heard of AT and didn’t have a clue what it entailed.

Once I had done a bit of due diligence, in other words, Googled the words “Autogenic Therapy” and then had a good look at the British Autogenic Society website, I thought that I might as well give it a try, particularly as my wife offered to pay for the course – obviously she was desperate that I tried to sort myself out given how difficult and unbearable I was becoming to live with!

I really had no idea what to expect from Autogenic Therapy and the entire AT experience and was surprised when, before we started, I was sent a very detailed form to fill in by the therapist that asked for a lot of detail regarding my life, childhood, operations, illnesses, family situation and my current issues.

It took me a while to fill it in properly and also gave me quite a bit of food for thought about my life and how I lived it.

When we met to go through the form the therapist explained that filling in the form was the first part of the self-examination process and that it was also important for him to know about my medical history in case I was contra-indicated for AT.

Thankfully I passed the test and was accepted!

It was explained that we would meet for nine weekly sessions each lasting about an hour and I would be asked to practice the AT Exercises that I learned in the weekly sessions at home, ideally three times per day.

What came through straight away was how calm the atmosphere was and how easy everything felt.

My therapist explained about stress and how it can work in a positive manner and how it can also overwhelm you and that Autogenic Therapy could help switch off the “fight and flight” response and turn on the body’s “relaxation response”.

Could it really be as easy as that?

Well yes it could. Each week I learned a fresh mental exercise which I would practice for about ten minutes every day in a neutral, balanced and symetrical position – generally flat on my back in bed, and slowly things started to happen.

I just felt calmer and more serene and my problems didn’t seem so insurmountable. I also started to sleep better. I just felt more in control of my life again.

Interestingly enough, I was also shown how to offload emotions that had got stuck inside me and was able to get rid of lots of repressed feelings of anger and anxiety.

I was given a brief tick-box test before we started which measured my levels of  anxiety and depression and I was pleased and relieved to learn that by the end of the course they had significantly diminished.

I didn’t really need this confirmation as I already knew that I had got over the hump and was now far better equipped to deal with the stresses of everyday life and was further boosted by the fact that AT had provided me with a toolkit that I could use everyday to ensure that I continued to cope.

Do you want to find out more about the benefits of Autogenic Therapy? Then please visit my contact page or call me on 07812 057 753 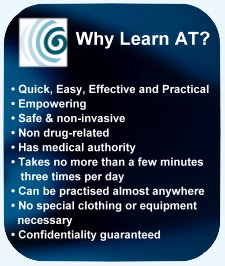 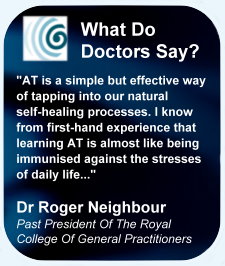